The Route 2020 project tunnel is part of the Dubai Metro Red Line extension that will connect Nakheel Harbour and Tower station with the site of EXPO 2020.

ACCIONA and Gülermak, responsible for civil engineering in the Expolink consortium, have completed boring on the tunnel that is part of the Dubai Metro Red Line extension.

On 5 June, the “Wugeisha EXPO 2020″ TBM made its entrance into the future “Dubai Investment Park” station, completing excavation of the 2.5 km tunnel that connects the Nakheel’s Al Furjan zone to the Dubai Investments Park – The Green Community, at a depth of between 12.5 and 36 metres.

For the excavation of the Route 2020 project tunnel, ACCIONA and Gülermak, have used a 9.66-metre diameter, 100-metre long TBM. The TBM has completed tunnel excavation in approximately 7 months, advancing an average of 15 m a day.

To reduce completion times, the TBM was preassembled outside of the access shaft, with final assembly completed onsite. A new method was also used to begin tunnelling very close to the surface, avoiding the use of deep access shafts.

Tunnel construction included the installation of a total of 1,450 rings, made up of 7 segments each. The ring segments include significant innovations, with the traditional reinforcement being replaced with steel fibre, which reduces assembly times and minimises problems such as rust.

In the coming months, other works will be completed inside the tunnel, such as construction of the second phase of the foundation, disassembly of auxiliary facilities, assembly of electricity and ventilation facilities, and more.

The Route 2020 Project will make it possible to extend the Dubai Metro Red Line by 15 km, from the Nakheel Harbour and Tower station to the site of EXPO 2020. In addition to the tunnel, it includes 11.8 kilometres of viaduct and the construction of 7 stations -two underground-, including the Nakheel Harbour transfer station and the emblematic Metro station located at the Expo grounds.

In 2016, the Expolink consortium, led by the French company Alstrom, together with Spanish company ACCIONA and Turkish company Gülermak, signed the contract to design and extend the Dubai Metro red line and modernize the existing systems with Dubai’s Roads & Transport Authority (RTA).

The project has a total budget of €2.6 billion (AED 10.6 billion). ACCIONA and Gülermak lead the civil engineering works, which represent 50% of the project. Meanwhile, Alstom is undertaking the other half of the project, which includes supplying 50 Metrópolis trains, integrating the Metro systems and improving the existing Metro line. 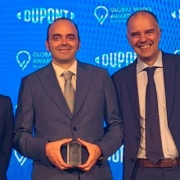 Manitowoc cranes expedite construction of Athletes’ Village at venue for 2019...