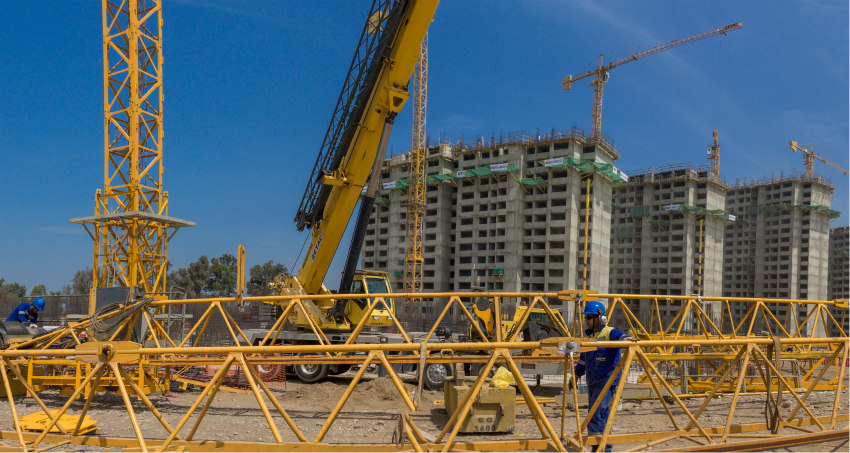 Five Potain MCi 85 tower cranes and a Grove TMS800E truck-mounted crane are playing a crucial role in constructing apartment units that will accommodate almost 9,000 athletes at the 2019 Pan American Games. The MCi 85 cranes have been configured with shorter jibs to increase their lifting capacity and meet the project’s need for high performance and velocity.

A fleet of six Manitowoc cranes is hard at work constructing the 2019 Pan American Games Athletes’ Village in Lima, Peru. Since last December, five Potain MCi 85 tower cranes and a Grove TMS800E truck-mounted crane have been onsite, lifting formwork, concrete blocks and smaller equipment. The village’s seven apartment towers must be ready by June of 2019, when the games start. The 1,096 units will accommodate all 9,000 athletes participating in the event in the Peruvian capital.

Meeting the Pan American Games organizers’ strict deadline was a crucial requirement for Besco-Besalco, the consortium of contractors which is managing the athletes’ village project. To ensure the four 20-story and three 19-story towers will be ready, the contractors needed versatile cranes that are easy to assemble, offer high job site efficiency and a great return on investment. After a period of research, project managers decided on five MCi 85 tower cranes. The TMS800E is working alongside the Potain tower cranes, assisting with heavier lifting. The combination is proving to be extremely successful, with all seven apartment blocks expected to be ready by November.

“It took us almost a year to start construction, because we needed reliable cranes and a company that could offer us great support, so we could meet the high standards of this project,” said Rafael Correa, project manager of Besco-Besalco. “All six Manitowoc cranes provided a perfect solution for this project, where high performance and velocity are at a premium.”

Correa pointed out that having one crane working on each building, instead of one for two buildings, expedited the construction process while reducing costs. This eliminated unnecessary time spent setting up additional cranes and eliminated labor expenses. In less than three months, 15 floors of four apartment towers were built.

The five tower cranes were assembled in configurations to enhance their lifting capacities. While MCi 85 tower cranes can feature up to 50 m of jib, the machines used in Peru have their jibs set between 35 m and 40 m. This increased their capacity at the jib end from 1.3 t to 2 t, which perfectly suits the needs of the project.

“By reducing the jib length, we increased the cranes’ capacity while avoiding the cost of higher-capacity cranes,” said Carlos Villacorta, general manager of ETAC Peru, a 10-year Manitowoc dealer that supplied the cranes for this project. “Thanks to the Potain MCi 85’s features, we were able to develop this efficient construction method and build tall buildings much faster.”

According to Didier Bigay, tower crane regional business manager for South America at Manitowoc, MCi 85 cranes are very popular in the region. The Potain MCi 85 offers maximum performance for a variety of projects, and its special features include low-noise emissions, simplified assembly, broad load curves and low power consumption. These same features are found on its successor, the Potain MCT 85 topless tower crane.

“The Potain MCi 85 was designed for easy assembly and its strong load chart makes it a very versatile crane,” Bigay said. “It can be used for numerous jobs in the region, and customers like the quality and performance of this crane. There’s a good reason that the MCi 85 was the best-selling Potain crane worldwide for more than a decade.”

After Pan American Games, the apartments will be made available to lower-income families in Peru.

Hiab geared up for the 2018 World Crane Championship

ACCIONA and Gülermak complete excavation of the ‘Route 2020’ project...
Scroll to top