Three tunnel boring machines (TBM) have excavated 19.5 km of tunnel for Line 1 of the Quito Metro. This project is currently 75% complete.

ACCIONA Construction, as part of the Line 1 Consortium, has completed the tunnelling work for the Quito Metro, with the last of the three tunnel boring machines (TBM) used on this project, “Luz de América”, reaching the end of the line in the southern part of the city.

“Luz de América” began its work in April 2017 and has excavated more than 9 km, from Solanda Station to its arrival at the El Arbolito exit shaft, passing through the historical city centre without damaging any of the city’s cultural heritage.

Furthermore, the “Luz de América” TBM also recorded the highest productivity levels for machines of this type, breaking the world record after drilling through 1,489.5 metres in just 30 days.

ACCIONA Construction used three TBMs for the Quito Metro works, each one over nine metres high, named “La Guaragua”, “La Carolina” and “Luz de América” respectively. These three machines have jointly constructed the more than 19.5 km of tunnel that will constitute Line 1.

The work by the TBMs was completed on time and in line with all quality standards, especially the work done in the city’s historical centre, which has been a World Heritage Site for 40 years.
With 100% of the tunnelling work completed, the “Luz de América” TBM is expected to be dismantled in the coming days, following the same process as the other two.

The Quito Metro project is currently 75% complete overall. A total of 14.9 km of track has been laid of the 45 km that will make up Line 1. The foundations have also been laid at 14 of the 15 stations.

Quito Metro’s future Line 1, which is due to be completed by late 2019, will be 22.9 km long, from Quitumbe to El Labrador, and will have 15 stations, making it the backbone of Quito’s new public transport system. 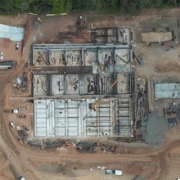 ACCIONA and SIEMENS consolidate their alliance to develop water projects 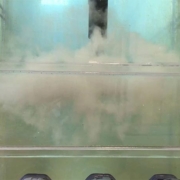 ACCIONA presents DIFFUSAIR ®, an innovative device for the generation of microbubbles
0 replies

China’s solar subsidy cuts will help US developers to revive projects and...