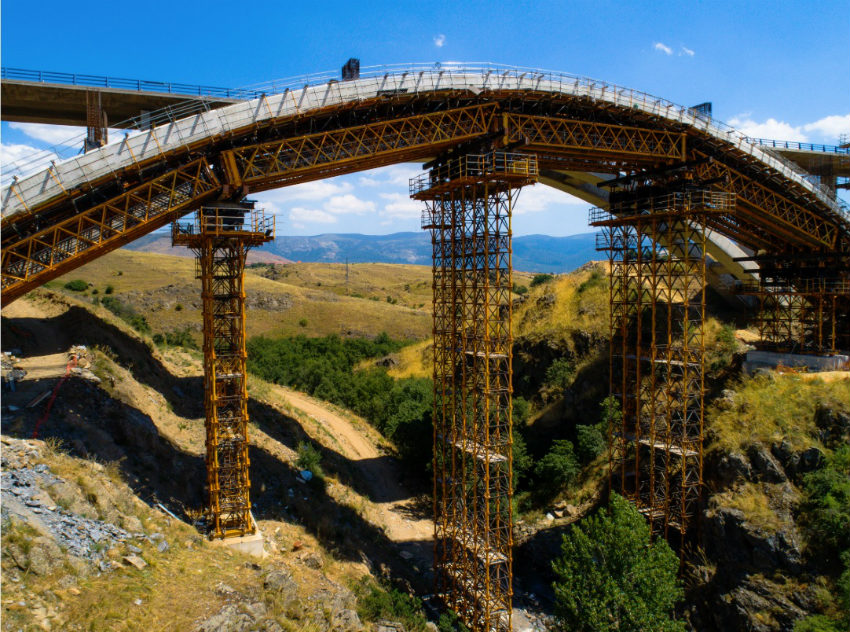 The Eresma viaduct in Segovia forms part of the SG-20 Highway expansion, the future ring road around the regional capital. It comprises one of the most heavily used transportation networks in the area, with the current volume of traffic tripling what was predicted in 2002, with 18,000 rather than 6,000 vehicles daily.

The uniqueness of the Eresma viaduct lies in its arched shape, with the deck placed on the upper part of the arch.

For the arch, ULMA proposed a gantry falsework solution set on foundation to span the precipitously steep terrain. The geometry of the arch was formed with 20 m long H-33 Trusses to support the double sided formwork system used to form the curve.

The shoring system consisted in T-500 towers reaching 40 m in height, without the need for any additional bracing. The entire arch was built with only five supports.

The technical support teams of ULMA and the client worked together throughout the construction project of Eresma Bridge to optimise every solution, with an eye toward saving material and reducing costs. Given the short distance between piers, the solution chosen for the deck consisted in a system of supporting brackets set on the pier caps, upon which the formwork was directly supported. Thus, the pier itself served as a shoring system, making it unnecessary to modify the terrain in order to assemble shoring structures on the ground.

All of the collective protective equipment necessary was supplied for the shoring towers, trusses, and formwork, making it possible to complete all auxiliary work in complete safety.

The effective coordination between the different teams in charge of planning, engineering and on-site assistance, together with ULMA’s technical and logistical capacity, have been the decisive factors for the execution with guarantees of the viaduct over the Eresma River in Spain, which will improve the flow of traffic and road safety.

This video shows the details about the integral solution provided by ULMA in the construction project of the Eresma Bridge in Segovia:

ULMA has taken part on the construction project of New Ross

Bridge over the Cuiabá River in Brazil

ULMA achieves the PEFC certificate for its commitment to the environment

50th anniversary of Ucrete: the world’s toughest floor since 1969