Towering over some of the world’s highest-profile projects, the MDT 809 — Potain’s largest topless crane — delivers on all fronts.

Following a successful launch at bauma 2019, the Potain MDT 809 tower crane has arrived at job sites across Europe and North America. The model is the largest topless tower crane ever built by the manufacturer and was developed with significant feedback from crane owners and operators, most notably Sweden’s Lambertsson Kran.

The company was closely involved in Manitowoc’s Voice of the Customer program for the crane, which is a key element of The Manitowoc Way putting Manitowoc’s customers at the heart of its business.

Lambertsson went on to purchase the first MDT 809 and soon after delivery dispatched it to a hospital expansion project in Skövde, around 160 km (100 miles) northeast of Gothenburg. Here contractor ByggDialog has it rigged with a 55 m (180 ft) jib and a 37.4 m (123 ft) height under hook on fixing angles, and is using it to erect the hospital’s concrete structure.

“This is a challenging project that involves lifting heavy elements over long distances,” said Jan Heed, managing director of Lambertsson. “With its large capacity, we knew the MDT 809 was the right crane for our customer.”

Lambertsson runs a large Potain rental fleet and has been a distributor for the brand since 1980. The company has 200 Potain cranes in Sweden and a further 150 in Norway, through its Norwegian sister company Kranor AS.

Across the Atlantic, the first Potain MDT 809 to arrive in the United States went straight to Washington D.C., to assist with concrete pouring and moving rebar and formwork at the City Ridge project, a 10-acre redevelopment that include 652 residential units, 150 hotel rooms, and retail and office spaces.

“The material is not much heavier than we would usually encounter, but with the MDT 809 we can move much larger amounts of material at a time, which enables us to be way faster and keep pace on the schedule that we have. The MDT 809 definitely plays a critical role in improving our efficiency on the job site,” said John Bildstein, special operations manager at Maryland-based Schuster Concrete Construction, one of the companies involved in the project.

Bildstein goes on: “Potain is the only brand that has a topless crane design combined with excellent load charts like the MDT 809 M25. We also chose it because almost our entire fleet consists of Potain cranes, and we are comfortable deploying the equipment on any job. Also, over the years we have received excellent customer service support from Manitowoc.”

Back in Europe, a gigantic MDT 809 has been added to the skyline of one of the world’s most famous capital cities, Paris. Assembled in December 2019, the crane is working on the reconstruction of the Notre Dame Cathedral, which was devastated by fire on the evening of 15 April 2019 in a tragic event that captured the world’s attention.

Erected within the physical constraints of the Île de la Cité, the Seine islet in which Notre Dame stands, the MDT 809 brings unprecedented lift capacity and reach. Despite its relative size, the crane’s compact design makes it ideal for downtown job sites.

“Having been able to assemble such a powerful crane in such a tight job site was a big advantage to this project,” said Jean-François Minoret, a regional director at Uperio, the company which supplied the crane to the Notre Dame job site. “We’ll now benefit from the crane’s 25 t lift capacity and 80 m radius for all the site’s lifting needs.” 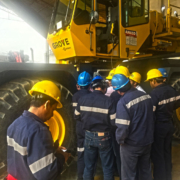 BIR’s 2019 Annual Report: Learn from the past in planning for the future
Scroll to top