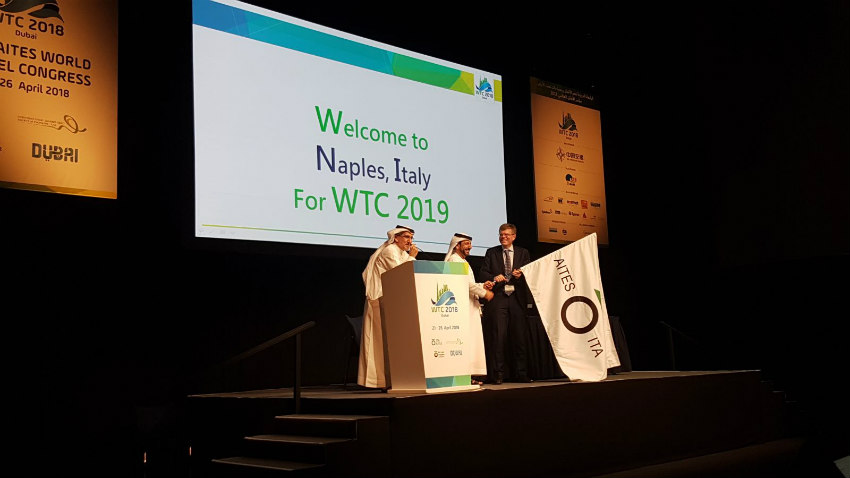 The construction of the Mount-Cenis railway base tunnel, from France to Italy, is quickly proceeding and it has overcome 5 km the 15th of July.

In Saint-Martin-La-Porte (France) the TBM “Federica” is excavating at a 14-meter-pace per day, and it has reached 4.3 out of the 9-km-long geognostic tunnel. The 57.5-km-long base tunnel (of which 45 km in France and 12,5 in Italy), consists in two parallel tubes, connected by three bypasses per kilometer. It is the main part of the 65 km cross-border section of the Lyon-Turin railway line, which connects Susa/Bussoleno to Saint-Jean-de-Maurienne.

TELT is the French-Italian public promoter in charge of the construction. This section represents a priority for the European Union, as it allows to cross the Alps, by turning the existent mountain line into a flat one.

The excavation is currently going through the most critical part of the tunnel, from a geological point of view. In this area, works are being conducted by traditional excavation. The section where TELT is currently working presents very complex geological and mechanical conditions. Work here does not even stop at night. Workers, organized in teams, cover three shifts, meaning 24h a day, and 7 days a week.

450 people are employed on this site, 68% of whom come from the Rhône Alpes region (52% from the Maurienne Valley). 69% of them are workmen, while the others are employees and technicians, with some trainees and young apprentices as well.

A staff of around a hundred people (75% of whom local) is employed in the ashlar factory, at a few kilometers distance from the work site. Here, an old sawmill has been transformed into a modern industrial plant, where up to 90 precast reinforced concrete segments are produced every day, to build the rings for the final tunnel support.

A similar factory will be built on the Italian side, in Salbertrand. Here, a degraded area will be restored, and then returned to the municipality as soon as the works will be completed.

Almost 800 people are working on the project in both countries. 530 of them are employed on the work sites, whereas around 250 are responsible for supplies, and engineering. At the peak of the work, there will be 4,000 direct employees and about as many involved in supplies. Therefore, highly specialized professionals will be needed.

In France, there is a lack of site managers, automation engineers, miners, machine drivers, etc. For this reason, a “Promotion of Lyon-Turin jobs” program was launched, as part of the “Démarche Grand Chantier” initiative. The DMC is a public French initiative to maximize the local benefits of major projects. This program has included a series of activities so far, from meetings in schools to training and apprenticeships.

Two international stations, in Susa (Italy) and in Saint-Jean-de-Maurienne (France), are also part of the Lyon-Turin new railway line project. They will be located at the tunnel portals, as well as some technical areas and the interconnections to the national railway service.

Their design aims at creating new, attractive hubs, in order to gain a central role in the life of the communities which live around them at different times of the day, even when the station itself is closed. This will be possible through the integration of transport with commercial and cultural activities, as well as sports, recreation and information facilities. People will be able to reach the ski resorts in the Alps within a 30-minute-transfer.

150 years after the Frejus tunnel inauguration, the existing mountain railway will be transformed into a high-performance and modern railway, able to move people and freight across the Alps.

SK850LC-10E | Kobelco to launch its largest excavator in Europe