From the 9th to the 15th of June, 2017, the International Tunnelling and Underground Space Association (ITA-AITES) and the Norwegian Tunnelling Society will held the World Tunnel Congress (WTC) in Bergen, Norway, where the demanding landscapes of mountains, fjords and islands inspired a very early utilisation of underground space for transportation and energy generation and storage. As early as in 1909, the Bergen Railway linked the Norwegian west coast to eastern Norway through 182 tunnels.

High on the agenda of the WTC event in Bergen is the bringing together of stakeholders and highlighting the major issues in tunnelling that are likely to dominate the next few years. The common passion for “going underground” must be turned into a new means for global responsibility. That is why this edition of WTC will be the occasion to discover the latest state-of-the art innovations in urban planning and underground construction projects in Norway and worldwide and will focus on ‘Surface Challenges, Underground Solutions’ of which Norway’s technologies have set the example.

A dynamic and buoyant sector in a context of global economic decline:

Question 1: The upcoming World Tunnelling Congress will be held on 9-15 June, in Bergen, Norway with the ambitious theme of “Surface Challenges, Underground Solutions”. What are the main stakes and expectations for this edition?

First, there is a growing awareness by the public about the advantages of underground solutions. In some cases, the population has reacted very well to initiatives by the Government when adopting underground solutions to problems that had been considered facts of life. A good example is the recent Porto Maravilha Project in Rio de Janeiro. The construction of a tunnel made it possible to see again the spectacular seafront view of the Guanabara bay and the Sugar Loaf from the downtown region. The view had been hidden for decades due to the construction of an elevated highway. As a consequence, a major rehabilitation program is underway with major benefits for the real estate market and for the population. In other cases, even more interesting, the people by themselves have taken the initiative of finding underground solutions to upgrade their urban environment. This was the case of the Boston Central Post Office Square. The growing awareness has reflected in an increase of the demand for underground solutions. Second, the use of new technologies has brought many advances for the reliability and the decrease of construction time of underground works. Both aspects will be covered in the technical sessions at the WTC 2017.

Even during recent years when the global economic scenario was not the best, the tunnelling industry was experiencing some increase. This probably occurred because of the reasons shown in the response to (your) the first question and to the backlog in infrastructure which still exists in many countries. Now, there are indications that we are approaching a period of significant increase for the industry. Per information from one of our Prime Sponsors, new orders are increasing. The WTC event will be the occasion to unveil a new survey on global tunneling market forecasts.

Tunnelling Industry and Climate change or how tunnelling can reduce negative anthropic impacts:

Question 3: According to the NASA Global Ice Viewer website*, glaciers lost approximately 400 billion tons of ice per year since 1994, with the Artic recording an approximate decrease of its surface of 13% per decade… Climate Change is now and the report is alarming. Sea level rise will impact mostly urban areas. How can tunnelling and underground spaces development limit the harm that could be inflicted on urban populations?

The most obvious way is by increasing the capacity of stormwater conveyance tunnels, and by creating underground reservoirs to store water during high tide storms. Examples are the Metropolitan Area Outer Discharge Channel Tunnel (MAODC) project in Tokyo and a parking garage and stormwater facility in Rotterdam and of course the multi-purpose Storm Management and Road Tunnel (SMART) in Kuala Lumpur.

In addition to melting ice, climate change has brought a significant increase in the variability of precipitation. The occurrence of floods and droughts has increased. In my home city, São Paulo, it rained more in just a few hours at the beginning of April than the historic average for the whole month. On the other hand, we had the driest March in decades. In order to mitigate the effects of droughts, the role of reservoirs and tunnels interconnecting them for better management is obvious.

Question 4: Underground Spaces and Tunnelling planning have emerged as priorities among the policies of the United Nations. Do you think this will encourage governments to take action and develop projects in order to protect populations?

The United Nations International Strategy for Disaster Reduction strongly suggests planners to take measures which make cities more resilient. The excellent performance of tunnels when compared to that of elevated transportation infrastructure has become evident in many occasions, for example in the Loma Prieta earthquake in 1989 in the San Francisco Bay Area. Dr. Aliye P. Celik, a sociologist, and the Chairperson of the Habitat II Conference in Istanbul wrote in the WTC 1996 Open Session in Washington, DC: “… Tunnels will be a useful tool for water and energy supply, sewage and transportation systems”. I am sure that governments will more and more need to show compliance with state-of-the-art planning for their cities including the extensive use of the underground space.

Tunnelling Industry and Digital Applications: the future of tunnelling tools and programs:

Question 5: For centuries, the tunnelling industry has always required the most advanced technologies: nowadays, what is the cutting-edge technology currently used in tunnelling construction?

The evolution of tunnel-boring machines, rock drilling and concrete spraying equipment, among others, is remarkable. In all these, the extensive use of information technology has brought significant improvement for productivity and reliability of tunnel excavation.

Question 6: Global societies have shifted over the years. The digital era is now on and it’s impacting world industries and economies. How does the tunnelling industry adopt these new tools ? (safety applications…)

The use of on-board electronics in equipment for both mechanized and conventional tunnelling has increased significantly, bringing improvement related to reliability of the excavations and decrease in construction time. Similar progress has also occurred in monitoring underground construction works with the use of fiber optics, information obtained by satellites, etc. During the San Francisco WTC in 2016, a special technical session dealt with these developments and their positive impact for underground excavations.

Question 7: Do these new technologies create a new landscape in tunnelling employment? If so, what are the most sought-after new profiles for the tunnelling industry?

Mastering digital tools is essential. However, understanding the complexity of the phenomena involved in tunnel excavation (mechanical interaction with a ground mass sometimes characterized by important variability) is still very important. 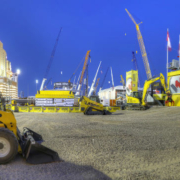 Wacker Neuson at Conexpo 2017: Taking a look into the future