It is known as the southernmost fjord in Europe: the Bay of Kotor in Montenegro. The luxury resort Portonovi is being built in Kumbor, the former base for naval aircraft and divers. Briv Construction d.o.o. is using the Liebherr drilling rig LB 24 for the deep foundation work. As the region surrounding the resort is aiming at upmarket tourism, a well-known secret agent could even find his way there.

“Welcome to the Hotel Splendide. Your name, Sir?” Only moments ago the guest smoothed down his coat and entered the lobby with a female companion. “James Bond.” Hollywood star Daniel Craig checks in to “Casino Royal” in a hotel in Montenegro. Should one of his next missions lead the secret agent to the Adriatic Coast, he can stay in a new luxury hotel. The doors to the exclusive Resort Portonovi in the Bay of Kotor will open in October.

The former barracks of the Yugoslavian People’s Army in Kumbor makes way for picturesque bays and the hotel belonging to the South African luxury chain “One&Only”. Villas, apartments and piers as well as recreational and shopping facilities are being developed on approximately 1.4 km of coastline.

“Power and Precision. Simply the Best.”

One of the companies working on the prestige project for the tourist region is Briv Construction d.o.o. The biggest challenge for the deep foundation company is the stabilization of the beach section. Briv is relying on the Liebherr machine LB 24 and is drilling the piles required in the bay from a barge.

The first pile for this project was drilled by Briv in 2014. Since then the company has installed 70 km of piles using 22,000 m³ of concrete and 3,400 t of reinforcements. The piles are 32 m deep, have a diameter of up to 800 mm and are fully cased. The tools used are rock drilling augers and buckets. Briv had calculated with the installation of one pile per day. However, due to the good daily performance of the LB 24, latterly even three to four piles were installed, including concreting. “The drilling rig combines power and precision. The control system is simply the best,” so the machine operator Hanic Almir describing the handling.

Briv is also installing drilled piles for the luxury hotel’s pier. Furthermore, breakwaters are being built in the harbour area for protection. In addition to the LB 24, Briv is using two drilling rigs type LB 28, the piling and drilling rig LRB 125, the duty cycle crawler crane HS 873 HD, and the mobile crane LTM 1100, all from Liebherr, for the project.

The Door to a Dreamworld

The Bay of Kotor links a landscape resembling the fjords of Norway with the southern flair of the Adriatic Coast. The door to this dreamworld opens in autumn, when the Resort Portonovi welcomes the first guests. As he likes to move in exclusive circles, perhaps a certain guest will soon make a reservation there. If James Bond doesn’t return to Montenegro on a secret mission, then definitely to enjoy a drink in one of the most beautiful spots. Where Briv has the “Licence to Drill” – in the Bay of Kotor.

Liebherr 125 K: the largest fast-erecting crane in its class 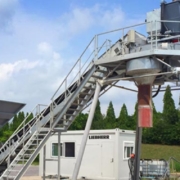 With the new LCM 1.0 Liebherr offers a concrete mixing plant for smaller budgets

Liebherr in an ultra-modern bus terminal in Moscow