Speaking about the decision to order the CKE3000G, which was sealed at Intermat, Paris (23-28 April, 2018), Elliot Hawkins, Hawks’s managing director, said: “The CKE3000G is a very flexible machine that will not only work well in the pre-cast, modular building sector, currently one of our largest markets, but will also open the door to new opportunities in the UK’s heavy lift marketplace, particularly the energy sector – gas, oil, renewables and energy to waste power plant construction – and on large-scale infrastructure projects, such as HS2 and Hinkley Point C”.

“After careful evaluation we chose Kobelco’s CKE3000G because, having compared it to many of its competitor’s models, its duties in standard luffing jib configuration were really impressive. We did some very thorough comparisons with several other competitor’s cranes and it out-performed one by a staggering 35%. It also beat a 350-tonne competitor machine, which is incredible. Signing this deal shows our commitment to Kobelco and I look forward to continuing that relationship for many years to come and receiving our new CKE3000G at next year’s Bauma in Munich”, added Hawkins.

A multi-purpose “all rounder”, the CKE3000G is suitable for a range of applications, loads and job sites. Attachments include fixed jib, heavy fixed jib and luffing jib. For heavier lifts there is a super heavy lift configuration, also with a luffing jib.

For ease of transport the width of all components is less than 3 m (10 ft), while power comes from a Scania 13-litre, 331kW engine that meets Stage IV/Tier 4 Final emission standards without the need for a particulate filter.

This latest order for the CKE3000G follows Hawks visit to Kobelco’s headquarters in Kobe, Japan last October (2017) to see its second Kobelco CKE2500G-2 roll off the production line. The visit saw Elliot Hawkins visit Kobelco’s factory in Kobe to inspect the machine, which was being painted in its black and white livery before being shipped to the UK.

Delivered to Hawks’s Dartford depot in December 2017, the CKE2500G-2, which has a maximum lifting capacity of 250 tonnes at 4.6m and a maximum boom length of 91.4m, was supplied with a luffing jib.

The visit also saw Hawks place an order for its second CKE900G-2, which, like the CKE2500G-2, is fitted with Kobelco’s KCross remote operation management system to help maximise machine efficiency and uptime.

Hawks bought its first CKE900G-2, which has a maximum lifting capacity of 90 tonnes at 3.9m, in 2016. The latest CKE900G-2, which was supplied with a main boom and a fly jib, is currently working on the Royal Wharf high-rise residential project in East London. 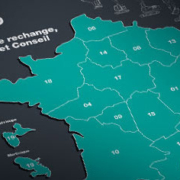 Kobelco strengthens its demolition and vehicle dismantling range with the SK140SRD

SK850LC-10E | Kobelco to launch its largest excavator in Europe

Continental has installed the first floating solar cover in Cyprus