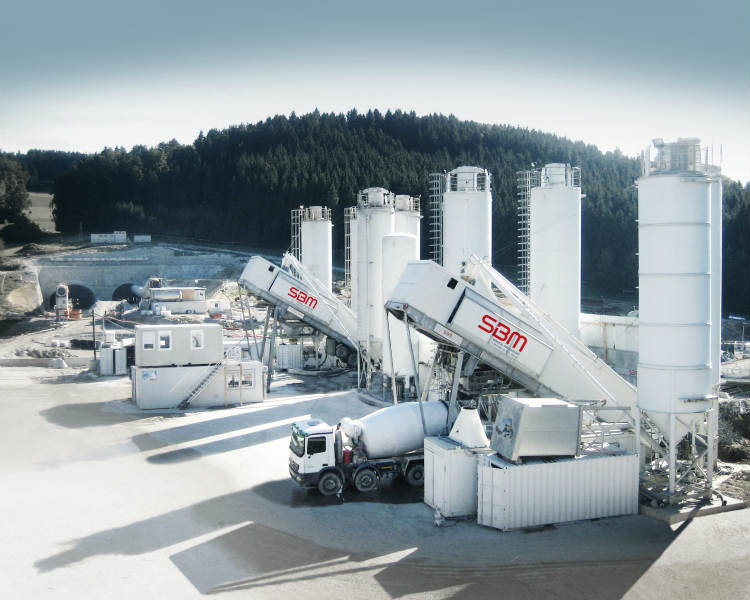 The expansion of international traffic routes through the Alps would be inconceivable without tunnels. The realisation of this costly infrastructure projects required first class concrete quality at economic conditions. The mobile concrete mixing plants from SBM Mineral Processing have proven themselves as a successful competitive factor. Just recently, the traditional Austrian company delivered the 12th EUROMIX® concrete mixing plant to Europe’s largest mobile concrete producer.

It is certainly no coincidence that SBM, as an internationally leading company in concrete mixing plants, has its company headquarters in Austria. Situated on the eastern end of the Alps, the highly frequented transit country has had to arrange its modern routes around its mountainous topography right from the start and focus especially on tunnel building. This is not least the reason why Austria is the world’s leading tunnel builder. Austrian norms and standards determine many international regulations. They have substantially contributed to making sure that modern tunnels not only withstand a high ground pressure, but are also resistant to frost and road salt, fire and chemical effects of accidents. SBM has been part of this success story for decades, and over time has repeatedly delivered internationally recognised mixing plants for even higher concrete quality.

But tunnel building is not just about the high concrete quality. Additionally, it must be available in large quantities and just in time. Which is why ideally you produce directly on the tunnel portal with mobile concrete mixing plants. It sounds easy, but in practice is an enormously demanding task. As the construction site in the tunnel, the logistics of the concrete, the production as well as the supply of concrete ingredients have to be precisely coordinated, and the concrete quality kept constantly high. Which also means keeping concrete at temperature in winter and cooling in summer. Naturally, all of this at the lowest possible costs and keeping the environment in mind.

Thanks to shorter paths and fewer truck journeys, concrete production with the supermobile EUROMIX® concrete mixing plant from SBM at the construction site reduces the CO2 emissions by around 25 percent. The cost savings are also significant. On the one hand they result from the quicker operational readiness of the plants and their greater flexibility. Moreover from their performance and high reliability and longevity. A wheeled mobile EUROMIX® is ready for operation after just 480 minutes, as no fixed foundation construction is necessary. The twin-shaft mixer of the EUROMIX® 4000 achieves an output of up to 170 m3 hardened concrete per hour. With their robust and fully galvanised steel construction, all systems are designed for reliable 24/7 all-year round operation in all climate zones. Mr Horst Wiener, Managing Director of Mobile Betonkonzepte GmbH (MBK), Europe’s largest mobile concrete producer, says: “SBM concrete mixing plants are not only the no.1 in Europe for tunnel construction sites, but also for us. Many millions of m3 of best quality concrete speaks for itself”.

In addition to MBK, also many other leading tunnel construction companies such as Porr, Strabag, Metrostav or Marti Tunnelbau value the many benefits of concrete mixing plants from SBM.

In addition to concrete mixing plants, SBM is the only company in the sector which also offers well– conceived total concepts for tunnel construction sites. Total concepts means that also for the material management first class solutions have been developed for the processing and conveying systems. In this way, SBM solves one of the biggest problems in tunnel building: the processing of excavated material, which after preparation can be reused as high quality aggregates for concrete production. For this reason SBM has developed a seamless and interdependent quality system which encompasses the whole production chain. It ranges from crushing, screening and conveying to washing, dewatering and storage right through to mixing of high quality concrete and its delivery. The benefits: positive environmental and cost effects by saving additional resources such as gravel pits, storage sites and transport routes. And last but not least also the acceptance of tunnel building projects by the affected local population increases, as this total concept significantly reduces the burden for people and the environment.

A Liebherr Compactmix 1.0 operates at an altitude of 2,340 metres in Switzerland 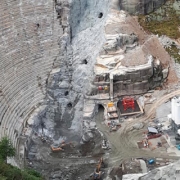