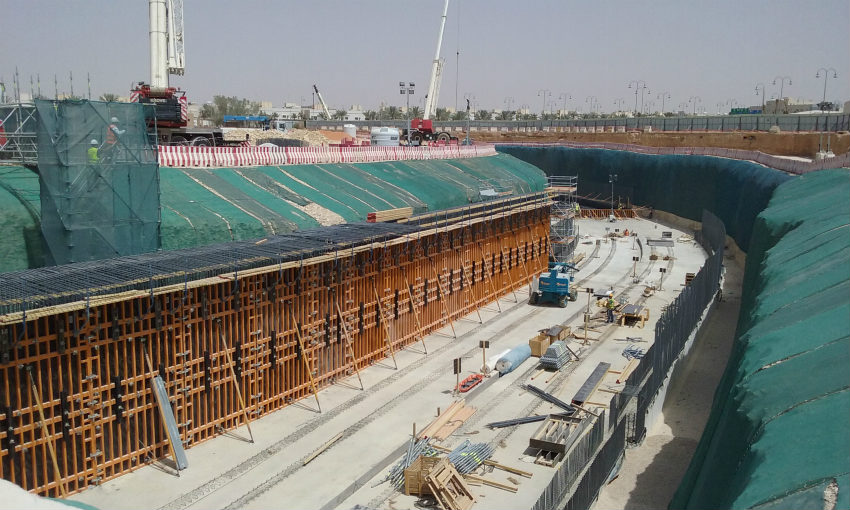 Riyadh is a Saudi Arabian city that – like any big city anywhere in the world – is home to a high density of vehicular traffic. An underground rail network was built in order to reduce traffic and improve both access to and communication between the city centre, the airport, and the financial district.

Riyadh Metro’s project was designed with six lines stretching a total of 175 km, intended to serve the needs of this city with a current population of 5.7 million, which is expected to grow to 8.3 million by 2030.

An exterior shoring system was designed for the construction of the foundation and first phase of the inclined walls. Assemblies were built specifically so that they could be lifted and transported by crane, thus greatly reducing the time necessary for project completion.

The second phase employed a formwork system built from the ground up, composed of single-sided EUC Trusses and 5 m panels.

For the final phase, the single-sided climbing formwork CR-250 was used, offering both strength and ample platform space to create an utterly safe working environment.

The tunnel walls, 6 m in height, were built using ORMA Modular Formwork. Assembly and disassembly was extremely efficient thanks to its large panels with few accessories.

Large infrastructural projects such as this always require many working platforms at different levels as well as a system of temporary access routes including stairways, footbridges, and other structures. BRIO Multidirectional Scaffolding was used to create this access network given that it is certified under European safety standards and is extremely flexible, permitting the construction of all types of structures from a small number of standardised components.

ULMA, in alliance with ATTIEH, our official partner in Saudi Arabia, provided the comprehensive formwork and scaffolding systems for this important infrastructure.

Bridge over the Cuiabá River in Brazil

Metro excavations revealed the history of Istanbul, history books will be reviewed
0 replies

An All-round Machine for Deep Foundation Applications: the New Piling and Drilling...