Commercial vehicle sales in Spain, France and the United Kingdom continue to grow strongly. In contrast, demand in Russia remains restrained. During the past business year 2015/2016 (from 1st April to 31st March), Europe’s largest trailer and body manufacturer, Schmitz Cargobull AG, expects an increase in sales to approximately 53,000 vehicles (previous business year 2014/2015 approximately 45,000 units).  In the current business year (as of 1st April 2016) the manufacturer for heavy commercial vehicles also expects the positive trend to continue, and will exhibit at bauma and IAA 2016 with optimism.

The expected double-digit growth (>18%) in orders received emphasises the position of the market and technology leader. “Stronger growth in Western and Central Europe enables us to more than compensate for the low number of orders from Russia,” states Chairman of the Board, Andreas Schmitz. The company further expanded its leading position for heavy transport vehicles for the construction industry with its tipper semi-trailers. At the end of 2015, Schmitz Cargobull achieved the leading position in Europe’s most important volume markets for tipper semi-trailers.

More than 3,000 tipper semi-trailers were sold and delivered in the first three quarters. In comparison to the same period of the previous business year, this represents a production increase of approximately 10% for this product segment. As such, Schmitz Cargobull has also become the largest manufacturer and Europe-wide market leader in this segment.

The 2015/2016 business year began with a positive dynamic. An increasing number of orders and a positive economic forecast for the volume markets in Central and Western Europe reflected the positive trend that continued throughout the past business year.

The modular trailer generations represent one foundation for this success. They have been successfully launched in the European markets. Customers have received them very positively due to their highly variable configuration and high industrial quality, along with the increased availability. The trailer-related services are another important factor. Furthermore, the digital networking via telematics, data services and a comprehensive service programme for the trailers serve to significantly increase the efficiency of logistics companies. Trailers and services are the key aspects for innovation and market leadership in the commercial vehicle industry.

With vehicle sales of around 53,000 units (previous year: 45,000) the company forecasts a turnover of approximately €1.75 billion (previous year: €1.589 billion). At more than 55%, the equity quota is far above the industry average. As a result, Schmitz Cargobull holds a leading ranking in the German industrial landscape, and has a solid foundation for further growth using its own resources. Investments amounting to approximately €70 million are planned for the 2016/2017 business year. Schmitz Cargobull currently has approximately 5,150 employees.

THE LYON-TURIN LINE: €3 BILLION WORTH OF WORK FOR THE BASE TUNNEL BETWEEN FRANCE AND ITALY 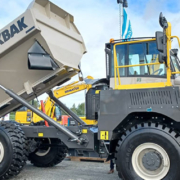 ContiTech Honors Suppliers of the Year

Volvo goes for the gold
Scroll to top