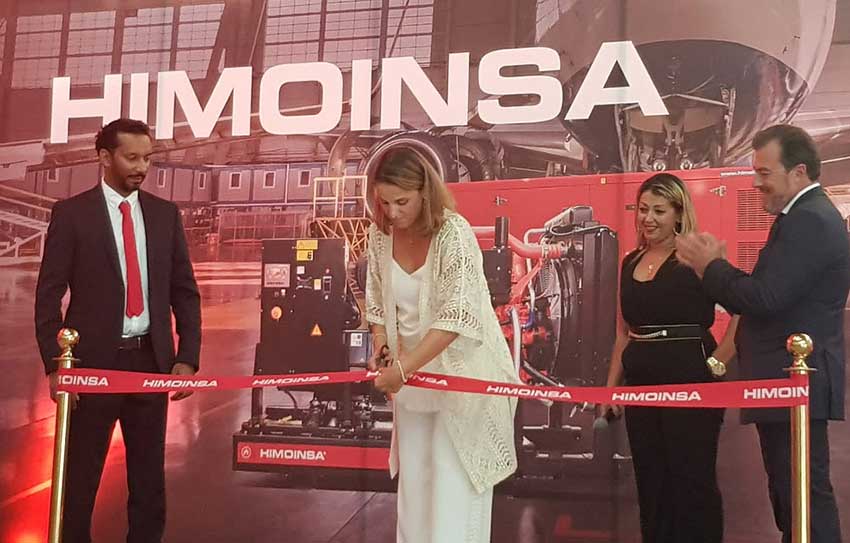 After 18 years operating in the Moroccan market, HIMOINSA has decided to open a sales office in Casablanca, Morocco, with a local technical team and a warehouse area for stocking generator sets, lighting towers and spare parts in order to offer an even faster response to the market.

This is the company’s third sales office in the African continent, following the opening of HIMOINSA Angola in 2012 and HIMOINSA Southern Africa in 2016.

The inaugural event, held at the new facilities located in Zenata (Casablanca), was attended by part of the HIMOINSA executive management team, as well as Moroccan companies which the company has been working with within the country for several years. The event was also attended by authorities from the Spanish diplomatic offices in Morocco, as well as specialised press from the industrial and energy sector.

Lydia Gracia, Executive Director of HIMOINSA, says the opening of the Moroccan subsidiary is a strategic project for HIMOINSA. She adds, “The new facilities will allow us to support not only the Moroccan market but also the West African countries with whom we have been working for almost two decades”. The company’s goal is to be closer to the market, and the opening of sales offices and logistics warehouses in each region “allow us to strengthen technical consultancy for each project, as well as to intensify service support”.

With the opening of this subsidiary, HIMOINSA is stepping up its presence on the African continent. Guillermo Elum, EMEA Region Director, describes the project as one of the main milestones set by the company for 2019. “This new subsidiary will help us strengthen our presence in Africa and will add to the intensive work being done by the sales team in East and West Africa, as well as the subsidiaries in Angola and Southern Africa,” he adds.

Morocco has undoubtedly always been an important country for HIMOINSA. Over the last two decades the company has supplied secure generator sets under Standby application regulations in the country’s main installations. HIMOINSA generators can be found in Tanger Med, the newly-built port located on the  Moroccan side of the Straight of Gibraltar, 45 km from the city of Tangier, as well as new football stadiums like Stade Agadir and Stade Fez, with a capacity of around 45,000 spectators, and the emblematic Casablanca Finance City Tower. “During this time we have worked for the country’s leading telecommunications companies, as well as engineering firms, installation companies and large rental companies,” says Imen Sahbi, Sales Regional Manager at HIMOINSA and co-manager of HIMOINSA Maroc.

The new subsidiary in Morocco has a qualified local human team, made up of sales, management and administrative profiles. Sabir Zouhir, General Manager of HIMOINSA Maroc, says that the subsidiary’s main objective is to continue carrying out large projects with a local team that really knows the needs of the client. “The new facilities will have a large stock of machinery to ensure immediate delivery to the customer,” he adds.

Himoinsa guarantees the supply of electricity of Casablanca’s Finance Center

S-moving, the meeting of Smart, Autonomous and Connected Mobility, will stage...
Scroll to top