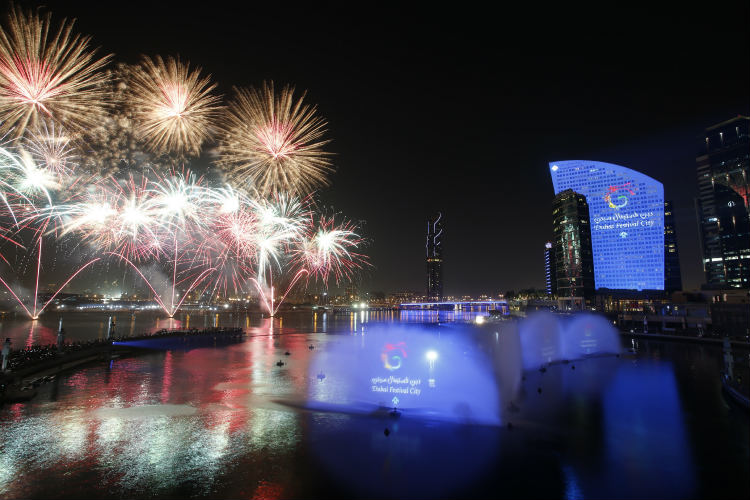 Four HIMOINSA generator sets are supplying 5.2MVA of power for IMAGINE. A spectacle rivalling any show in the world, featuring fire, light and lasers projecting detailed imagery onto a huge dancing wall of water holding the Guinness World Record.

Every night, thirty water fountains, lights and fire turn the façade of the Intercontinental Dubai Festival City Hotel into a screen five times larger than the biggest cinema screens. The “FIRE. WATER. LIGHT. AWE” show is the star attraction of this complex, recently expanded by the Al-Futtaim Group, and behind the scenes HIMOINSA is making it all possible by supplying energy for the 48 pumps that active the fountains, forming part of the show.

A complexity of the project is the rapid and continually changing load, due to the very nature of the spectacle. Working hand-in-hand with FAMCO, its distributor, and with Al Futtaim Engineering, HIMOINSA offered a solution of three HTW-1745 T5 generator sets. These start up, synchronize and provide up to 5.2MVA of PRP, acting all the while as a single source of energy. The three gensets are fed by a central fuel tank and auto filling system which keeps the whole plant primed for showtime.

This show required a dual start-up system able to guarantee that the units would start up at the most critical moments. For this special application, the control units of the three generator sets have also been configured to communicate and work in parallel with one another. The three generator sets start up at the same time, just as a power plant would, and the whole operation can be monitored and controlled from a single point. Depending on the load demand, during downtime and following the show finale, one or more generator sets automatically switch off and remains on stand-by in case of an emergency.

In order to optimize their efficiency, HIMOINSA has installed in parallel a fourth 60kVA, HFW-60 T5 generator set, which uses an FPT-Iveco engine in sync with the other gensets. When the show comes to an end, and the energy demand falls away considerably, this generator set starts up and the other gensets switch off, with absolutely no interruption in supply.

The generator sets have been housed in 40 feet containers that not only dramatically simplify the logistics of the operation, but also reduce the on-site work to the minimum not to mention the time needed to install them.

Design Certification of the Civil Aviation Authority for FlySmart and FlyFast...