Since its foundation in 1985, SAB has invested in more than 50 Liebherr machines. New Liebherr XPower wheel loaders and an R 945 G8 are the most recent additions. The SAB machines are in operation for an average of 1,500 to 2,000 hours per year in three different quarries. Production covers a quarter of the demand in the French département of Hautes-Alpes.

Ventavon (France), 16 September 2021 – “Choosing Liebherr is a decision for reliability and for the regular technical developments that meet our needs”, explains SAB Director Lionel Para. “We have a very good personal relationship with both Liebherr and its sales partner Ets PIC”, he adds. The origin of Liebherr machines is also an argument for SAB: “Buying machines made in Europe and even in France is an important signal at this time when we need to support our industries in an increasingly uncertain and globalised economic environment.“

SAB’s Liebherr fleet includes nine wheel loaders, of which seven XPower models were recently delivered. The XPower series is highly appreciated by Lionel Para for its ease of use and low fuel consumption. The XPower wheel loaders are characterised by higher engine power and thus achieve better acceleration and speed values. The hydraulic system and working equipment have also been improved so that higher breakaway forces can be achieved. The cab of the XPower wheel loaders offers full all-round visibility, is air-conditioned and features an adjustable 9-inch touchscreen and optional joystick steering to create a safe and comfortable working environment. Servicing the XPower wheel loaders via the service access points is efficient, simple, quick and extremely safe thanks to non-slip areas and stable ramps in the access area.

The latest Liebherr crawler excavator in SAB’s fleet is an R 945 G8, which is manufactured in Colmar, France. The fleet also includes an R 974 and an R 950 SME, also from Colmar. The main strengths of the Generation 8 are the higher engine power, the heavy counterweight, which allows higher bucket capacities, and the lower fuel consumption. Other innovations are the boom concept with modified head for better boom forces and the optimized load curve, which leads to fuel savings.Result: SAB’s R 945 G8 consumes only 18 litres per hour. All Liebherr Generation 8 engines meet the environmental requirements of exhaust gas Stage V.

The operating behaviour of the R 945 G8 has been optimised: Its manoeuvrability and comfortable cab make it the ideal machine for SAB operations. The Generation 6 R 950 SME model also fully meets the challenges of quarry use. Liebherr crawler excavators in the SME series are fitted with the counterweights of the next higher model in the standard series. This increases their stability and allows the use of larger buckets. Thanks to special cylinders, the machine generates exceptional tearing and digging forces, which improves the performance and economy of SME excavators.

Founded in 1985 in La Roche-des-Arnauds in the Hautes-Alpes département, the quarrying company SAB currently has 15 Liebherr machines in its fleet: nine wheel loaders, five excavators and one bulldozer. SAB operates the three quarries Sablière du Beynon, Sablière du Buëch and Monnetier Almont. The company masters the techniques of mining, manufacturing and selling granules. Its production covers 25 per cent of the needs of the French department of Hautes-Alpes. SAB currently employs 35 people in the extraction and transport of materials. 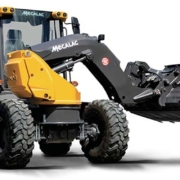 Liebherr at the 28th International Exhibition for Track Technology in Münster 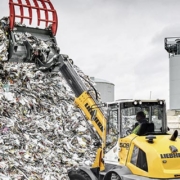 ALLU announced expansion to open manufacturing and operating facilities in ...
Scroll to top