On behalf of the Egyptian armed forces two work groups are erecting slurry walls with a total area of 520,000 m². Züblin AG and Orasom Construction form one group and Trevi S.p.A. forms the second group together with an Egyptian construction company. The slurry walls are situated to both the east and the west of the Suez Canal for access roads as well as shafts for subsequent tunnel excavations.

The slurry walls are approximately 1.2 metres wide and between 20 and 70 metres deep. The soil consists of approximately 80% clay and only the last 5 to 6 m are sand. The work on the slurry walls started in September 2015 and, according to actual information, should be completed by summer 2017.

The HS 8100 HD is successor to the HS 855 HD, the most popular model of the Liebherr series of duty cycle crawler cranes. It is installed with a 390 kW/530 hp Liebherr diesel motor. The duty cycle crawler crane impresses, on the one hand, due to its excellent level of working safety thanks to additional walkways and ladders, and on the other hand, due to its optimized hydraulics and the Eco-Silent Mode, which has an extraordinary efficiency under tough jobsite conditions. With the aid of the Eco-Silent Mode, the speed of the motor can be reduced to a required predefined level. This leads to a considerable reduction in the fuel consumption, and at the same time, a reduction in noise emission.

Multibillion Project at the Suez Canal

The construction of the tunnels is part of an Egyptian infrastructure project with immense dimensions. New tunnels are not only being built at Port Said but also further south at Ismailia. The project also includes the widening and deepening of the existing shipping lane of the canal, as well as the construction of a completely new lane with a length of approximately 35 kilometres in the northern section. The total investment volume amounts to approximately 4 billion US dollars.

Prototype of the Liebherr A 913 Compact Litronic wheeled excavator 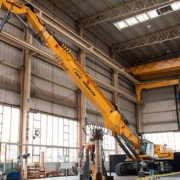 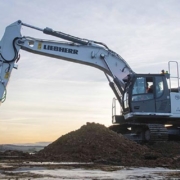 ULMA takes part on the construction project of the new office building Eschborn...
Scroll to top