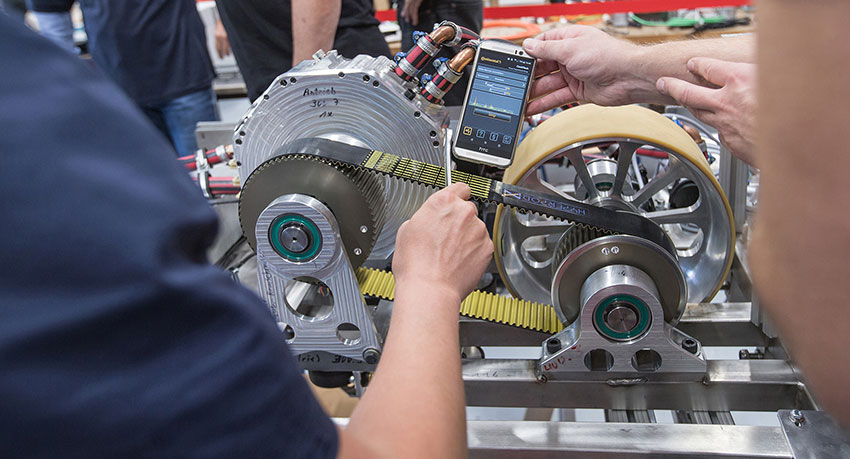 The technology company Continental has played a key role in shaping the history of drive belts and, in turn, the development of the industry. Registration under the brand name Continental – including for drive belts – dates back to 1899.

And it all began with a simple V-belt. The company has since developed and produced belts that deliver the necessary drive in almost every industry worldwide – from motorcycles to automotive and mechanical engineering, from agricultural machinery to elevators. Whether small, large, with teeth, ribs or bumps, open-ended or continuous, the products and technologies have always set trends and opened up new opportunities for the market – and will continue to do so into the future.

Continental is constantly enhancing and refining its materials, products and production processes. “Our engineers are currently working on an intelligent drive belt featuring built-in sensors. Digitalization and networking are heralding the next era of drive belt technology,” says Claudia Holtkemper, head of the Drive Belts business unit at Continental.

Let’s go back to the beginning. One hundred and fifty years ago, almost every factory had some kind of steam engine for powering weaving looms and spinning wheels. Energy was transferred by belts made from tough leather – a method that, at the time, was akin to an industrial revolution. But just a few years later at the dawn of the 20th century, Continental produced a V-belt made from a rubber compound with a connection lock. This set new technical standards for the transmission of rotary movements. Its predecessor, the flat belt, could transmit only about one third of the force with the same width. This represented a quantum leap in drive belt development, one that would be repeated in similar forms many times over. The demands placed on belts have grown continuously. They have to transfer more and more power, be as compact, robust and lightweight as possible, designed for use across all industries and, of course, they also have to work efficiently.

Continental took on these challenges as motivation for its pioneering achievements. As early as 1930, the company offered belts that were the ideal solution for applications in the agricultural sector thanks to their low weight, lengths of several meters and incredible flexibility. But Continental wanted even more. It continued to enhance and refine materials and increase the precision of production processes and machines.

The fruits of the company’s endeavors were clear to see: “In the 1950s, we produced timing belts made from polyurethane. Thanks to its steel-cord tension cord, it was even more powerful and kept the belt tension at an even more constant level. Unlike V-belts, its teeth were interlocking and very precise. This meant that our belts were once again in a higher performance class,” says Alexander Behmann, application engineer at Continental. These properties opened up potential for higher rotary speeds and smaller installation spaces. “Smaller installation spaces are seen in appliances such as vacuum cleaners, which nowadays are fitted with timing belts just 6 millimeters wide. To ensure that the belts are robust and durable despite their small dimensions, high-quality materials are vitally important,” says Behmann.

In the 1980s, material expertise had advanced to such an extent that V-belts could be manufactured without any need for a fabric coating. This made them even narrower, but also more powerful. The V-belts also featured a kind of interlocking system, giving them greater bending capacity.

Timing belts also underwent a similar development. With the Synchrobelt, the industrial supplier launched its first timing belt. It has an extremely wide range of applications – from printers and motors to all kinds of applications in the field of mechanical engineering.

The focus then was on improving materials and how they are combined, including fiber-reinforced compounds, EPDM, aramid tension cords and, later, carbon. “Today, Synchrochain Carbon is our strongest timing belt on the market,” says Behmann. This is because carbon hardly stretches, even under high tensile loads. It is frequently found nowadays in construction machinery, forestry and the energy sector. And last but not least, Continental’s belts will provide valuable support in the field of Hyperloop technology, which experts consider to be a revolutionary approach to mobility. Students at the Emden/Leer University of Applied Sciences and Oldenburg University used a Continental Synchrochain Carbon for a Hyperloop project. And with Synchroforce Carbon, Continental also launched its first oil-resistant rubber timing belt.

The company’s portfolio now includes more than 18,000 dimensions and designs for a wide variety of industrial applications. Its latest achievement – a belt with integrated sensor technology for condition monitoring in agricultural machinery – also represents a step into the digital age. “Digitalization and automation are advancing in all areas of industry. Our mission is to support our customers on this path and offer them solutions that will help to make their business fit for the future. We will continue to work on this with our drive belt expertise,” says Holtkemper.

Continental Supports Hyperloop Technology as a Logistics Solution of the Future

S-moving, the meeting of Smart, Autonomous and Connected Mobility, will stage...

Brady Inspection Timer: Maintenance is due!
Scroll to top